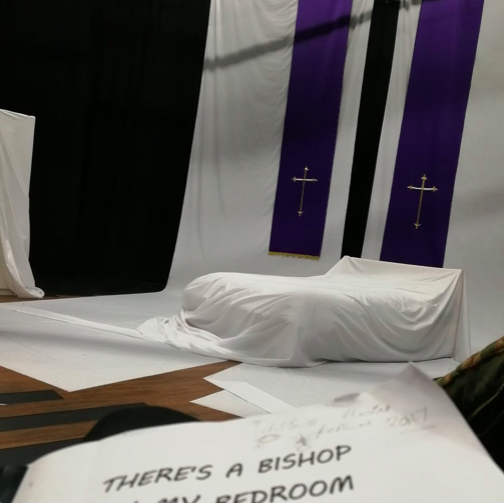 The title may sound like an eyebrow-raising Carry On comedy but Richard O’Leary’s frank, sincere, deeply felt one-man show is anything but.  That’s not to deny that, in places, it is extremely funny, but this is no conventional stage performance.  In undertaking it, Tinderbox’s artistic director Patrick J O’Reilly has put down another marker for his intention to lead one of Northern Ireland’s longest established independent companies into new creative adventures.

In collaboration with experienced dramaturg Hanna Slattne, seminarian, university lecturer and academic O’Leary has shaped his unusual life story into a solo narrative that captures and holds the attention, thanks to an irresistible combination of good humour and gentle subversion.

In broad terms, O’Leary is, indeed, a performer as witnessed by his relaxed, direct, mischievous delivery.  In his professional life, he is well used to standing in front of an audience and arguing a case; in his personal life, he has been a passionate campaigner for sex education, the provision of condoms, gay rights and same sex marriage, the latter emanating from a happy 25-year partnership with a Church of Ireland minister – an intriguing variation on the theme of mixed marriage.  Even so, baring your soul and sharing your most intimate and painful moments with a live audience takes courage and, in this particular case, lots and lots of love.

Surrounded by a set in which all its dressings are covered over with pristine white dust sheets, O’Leary is amiable and engaging as he fishes out all manner of memorabilia directly relating to his Catholic upbringing, his political activism, his academic research, his civil partnership, his bereavement.

Growing up in a devout Catholic family in Cork,  he stresses repeatedly that his was not the career route envisaged by O’Leary Snr. for his academically gifted son.  For some years, he went along with his father’s strictures, abiding by Church laws and ignoring the bits that seemed, well, not quite right.  But, little by little, he fell foul of priests and bishops and religious dogma and Canon law, moving to Belfast and revelling in the gay scene, getting involved in student politics, acquiring condoms for his counterparts in Dublin.  Then he met Mervyn, the man who was to become his soul mate.

The Revd. Mervyn Kingston was a highly respected member of the Anglican establishment until his relationship with O’Leary was revealed.  While continuing in his vocation, his subsequent treatment at the hands of the church he had faithfully served caused his partner to question repeatedly the morality of religious hierarchies who seek to impose morality upon others.  Their civil partnership was, like any other, marked by anniversary dinners, Valentine cards, affectionate photographs.  Its ending is imparted with unbearably tender candour, leaving the audience silently reeling at the emotional impact of this most unusual feat of theatrical storytelling.