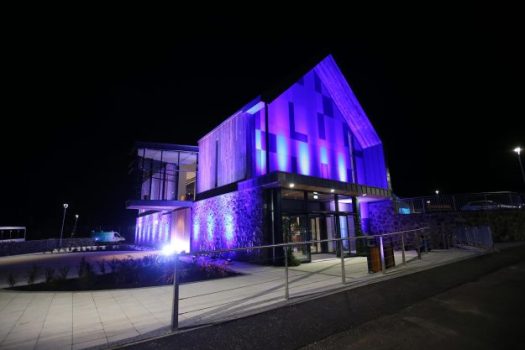 The December night is cold and heavy snow is forecast across the uplands of County Antrim and County Derry, but, undeterred by the seasonal weather, a procession of cars is making its way through narrow country roads to the small town of Bellaghy, which has become a place of literary pilgrimage.

The foyer of the Seamus Heaney HomePlace is buzzing with laughter and chat. Heaney’s sons Christopher and Michael are present, as are other members of their father’s family, who live locally and rarely miss the opportunity to welcome visitors from near and far to this vibrant cultural centre, where the spirit of the great man himself is ever present.

We are here tonight to listen to a talk by Fintan O’Toole, the distinguished Irish Times journalist and political commentator. A year ago, he gave an erudite and entertaining analysis of the state of play in Ireland in the wake of the Brexit referendum.

Twelve months on, he says his task has become rather more difficult – to dissect the tangled threads of the current situation and to share his vision of the road ahead.

In the packed round of the Helicon Theatre, he steps up to the podium without fuss, without introduction, without notes. The audience is attentive, expectant.

“Thanks for coming out on this horrible night,” he says. “I wouldn’t come out on a night like this to hear me”.

But we have come out and here we all are, united by our desire to share our concerns about the possible effects of Brexit on this island and to listen to a voice whose authoritative opinion pieces in The Irish Times, The Guardian and The Observer are widely quoted.

What is perhaps less known these days, except possibly among Irish Times readers of a certain vintage and the shared experience of colleagues, is that O’Toole was for a number of years a highly respected theatre critic for the paper. Having one’s homework marked by him in the weekly Second Opinion column was a daunting experience, but one which was softened by the generous positivity of this most exacting and informed of writers.

Characteristically, his talk at the HomePlace is illuminated by references to poetry, drama and literature. He begins his argument at home base by recalling Heaney’s membership of the illustrious Belfast Group, a poets’ workshop organised by Philip Hobsbaum when he arrived in Belfast in 1963 as a lecturer in English at Queen’s University. In his autobiographical writings from that time, Heaney identified what he memorably called ‘the repetitive intolerances of public life’.

O’Toole quotes as examples, unsubstantive refrains emanating this past year from both sides of the Atlantic – “Brexit means Brexit”; “Lock her up”; “Build a wall”; “Make America great again” – and maintains that such sloganising is not only boring and stupid, but dangerous in its denial of the subtlety, nuanced questioning and ambiguity which form the bedrock of democracy.

In examining what he views as “… the political vacuum in Britain,” his focus falls repeatedly neither on the Welsh (who voted to leave) nor the Scots (they’re still loudly proclaiming their commitment to remain) but on the English and the “… English nationalist revolution”, which he sees as the definition of Brexit.

He looks back four days to the DUP’s rejection of Theresa May’s proposed deal in Brussels as a landmark moment, the great public humiliation of a British Prime Minister and compelling evidence of a complete absence of authority.  He says the Brussels debacle should divert Britain from constantly reliving the humiliation of the Suez crisis, sixty years ago.

To illustrate the point, he quotes from the play he considers to be the greatest in the English language, Shakespeare’s King Lear, in which political authority is overturned on the whim of the monarch himself.

“Thou hast seen a farmer’s dog bark at a beggar? And the creature run from the cur. There thou mightst behold the great image of authority.”

The underlying significance of the quote is not wasted on the audience.

He concludes with an examination of the special, porous nature of Northern Ireland and the complexity of the Irish question with its multiplicity of identities, politics and history. Again, the attitude of English nationalism is held up for scrutiny with the opinion that it is “… allergic to the idea of multiplicity”.

He ventures to imply that the Northern Ireland situation might effect a kind of reverse take-over, a softening of the Brexit deal, because if Northern Ireland is judged to be special, then so too are Wales and Scotland and London … a kind of Trojan horse, whose very existence calls into question the wisdom of leaving the EU at all.

Invited contributions from the audience prove to be searching and far-reaching, prompting a half-hour extension to an evening already filled with challenging discussion and ensuring animated journeys home in the snowy darkness.

Note: Today, in the immediate aftermath of the agreed deal to proceed with Brexit talks, O’Toole wrote an article in The Irish Times, entitled Ireland Has Just Saved the UK from the Madness of a Hard Brexit.