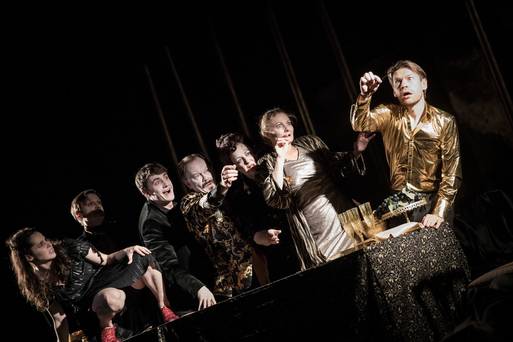 It’s probably the most remembered exchange between ballet master and dancer in Michael Powell and Emeric Pressburger’s magnificent 1948 film version of The Red Shoes and succinctly sums up the uncontrollable compulsion, the burning artistic desire at the heart of Hans Christian Andersen’s spiky little story.

In collaboration with director Selina Cartmell, writer Nancy Harris has shaken the original by the scruff of the neck and come up with a bittersweet modern fairytale. In Andersen’s narrative, an adopted country girl in a God-fearing community is undone by vanity when a pair of red shoes refuse to stop dancing until an executioner is summoned to chop off her feet. Harris’s less judgmental version pushes the notion of vanity into the background, concentrating instead on young Karen’s plight and the acquisition of a pair of sparkly red shoes which change her personality and her perspective on life.  The same story then, but different.

Its context is a sobering portrait of an Ireland where materialism and social climbing have become the order of the day but where the chilling spectre of Church influence and the Magdalen laundries still hovers.

The staging is to die for: an animated oil painting contained within a gilded frame the full width of the stage.  A succession of comically overblown characters prowl Monica Frawley’s burnished bronze and black set, brought to life by the shadowy brilliance of Paul Keogan’s mysterious golden lighting.

Cartmell directs with a bold eye for visual detail and physical expression. Proceedings begin with a surprise as David Pearse’s narrator interrupts the safety announcement with the first of a series of knowing interjections before morphing into the shoemaker Sylvester, a sardonic, green-booted fairy godfather figure.

The script, however, does not live up to the concept.  Harris is an acclaimed writer and the black humour displayed in dehumanising ‘the orphan’ is just one example of what might have been. There are  a number of scenes and encounters which do not earn their keep.  The nightmarish revelry in the forest seems to meander on forever, the amputation of the feet is virtually devoid of pain or jeopardy and the clever decision to have Stephanie Dufresne’s mutilated Karen dance en pointe in the falling snow is annulled when she is, inevitably, required to flatten her feet in the beautifully performed final sequence. 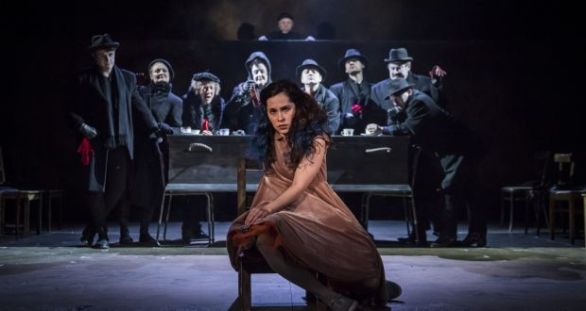 There are spirited performances from Owen Roe and Marion O’Dwyer as the appalling nouveaux riches Nugents, who, for dubious reasons, adopt a penniless girl whose mother has died in unspoken, mysterious circumstances. He is a crass wheeler dealer, she a wannabe socialite, their spoilt son Clive (Robbie O’Connor) an axe-wielding goth with a penchant for taxidermy.  Initially mute – a device which might have been more effectively continued throughout – Dufresne is at her most affecting when Liz Roche’s richly layered choreography is called upon to speak for the doomed Karen. And it is always a joy to behold the evergreen Rosalyn Linehan, here cast as an ancient retainer nursing her own tragic history.

In production terms there is much to applaud. A well integrated score by Marc Teitler incorporates song and piano segments, played live by Raymond Scannell and the overall visual effect is dazzling in this gift-wrapped festive offering. But there are exchanges between characters which feel unfocused. One wonders to what extent modern day references, social commentary and fleeting glimpses of characters from other fairytales go over the heads of younger audience members, who are the important customers at this time of year.