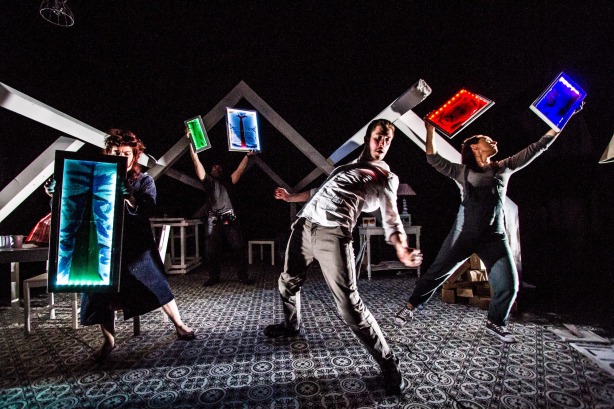 How many people do you pass in the street who are walking wounded, putting on a cheerful, positive public face while in reality cracking up?

John is not just cracking up. He’s falling apart. But why? He has a steady if dreary job in a call centre, a caring mother and a sensible, pretty girlfriend, who clearly adores him. He tries to hold himself together using staples, cling film and sticky tape but it’s not working.

The Man Who Fell to Pieces is a searingly honest and theatrically inventive interpretation of a real life crisis.  It is the first of three new productions which constitute Edgefest, a season by two of Belfast’s longest established independents, Tinderbox and Prime Cut, focused on the frighteningly pressing issue of male mental health.

Ciaran’s Bagnall’s chaotic, topsy-turvy set affords telling glimpses into John’s state of mind. Under the influence of Patrick J. O’Reilly’s Lecoq-inspired direction, Shaun Blaney delivers a sincere, intensely physical central performance, which at times is almost too painful to watch. This challenging role alternates between narrator and protagonist, the switches marked by Katie Richardson’s multi-layered soundscape, which burrows deep under the skin and into the consciousness.

O’Reilly has conceived, written, directed and choreographed this deeply affecting piece, investing body, heart, soul, memory, intellect and imagination into its execution.  The result is a rare feat of theatre making.

Roisin Gallagher and Patrick Buchanan add real grist to the characters of girlfriend Caroline and Henry, the handsome handyman summoned to fix everything that John’s mother Alice contrives to break. But even he can’t fix John, when a desperate Caroline delivers him home in a bag – in pieces.

The needy, neurotic, abandoned Alice, tautly played by Maria Connolly, might long to be loved but proves no pushover when it comes to the bit. Slopping around all day in a stained dressing gown, she is, underneath, quite a different woman.

John’s disintegration is cleverly conveyed through a handful of Warhol-style prints, balanced precariously across his body.  The effect is a dramatic embodiment of Japanese kintsugi ceramic technique, where gold dusted repairs form a vital part of the object’s beauty. 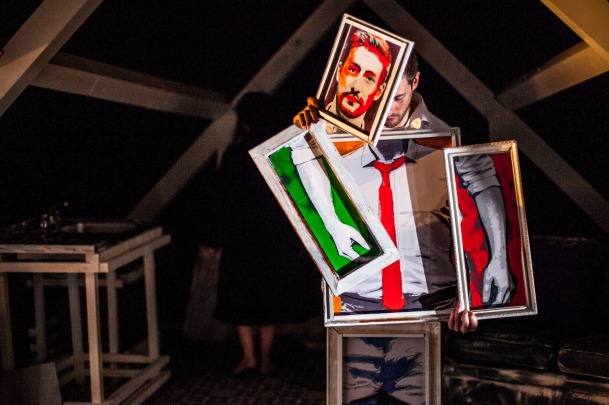 As narrator, John finally emerges to declare that, like a kintsugi porcelain bowl, his visible cracks and scars are to be cherished not concealed.  He has come through. Others, sadly, do not.