Its flagship event is the Belfast Children’s Festival, an international arts and cultural festival for young people, which, in terms of footfall, is the largest in Ireland and one of the largest in the UK.  Its 2018 programme runs from March 9 to 14 and incorporates some 170 events in 18 venues across the city.

“The theme this year is family and the diverse forms a modern day family can take,” explains director Eibhlín de Barra, who took up the post in 2016, having worked as YAA programme officer since 2012.

“The programme is very strong and many events ask important questions around the central theme. Cahoots NI’s Penguins considers same sex relationships through the love between two male penguins who long for a child; Horses by kabinet k from Belgium explores the notion of family as a community; Amadan’s Pink and Blue is a male-female gender exploration; Getting Dressed by Second Hand Dance looks at how people respond to the way a person dresses.

“I don’t think of a theme and then look around for work to fit in. The theme emerges from the work, all of which is hand picked. In the past month, I’ve been in South Korea, Germany and Galway, seeing work that may find its way here in 2020”.

Nicola Curry, founder and artistic director of Maiden Voyage Dance, was a member of the original small administrative team. She explains that the initial idea for a designated festival was prompted by a gap in arts provision:

“Anna Cutler, an English academic who had recently moved to Belfast, approached the Belfast Festival at Queen’s (now the Belfast International Arts Festival) asking why it had no events for young audiences. She developed a programme and a successful Arts Council lottery application, which supported the first Young at Art festival in October 1998.

“From the outset YAA successfully married excellent international work with opportunities for local artists to develop work for young audiences. Belief in their creative potential provided the catalyst for bold and fundamentally fruitful risks.

“Establishing a contemporary dance company in Belfast suddenly didn’t seem all that impossible. Connecting international with local is a key element of Maiden Voyage’s ethos and our Off Spring commissioning strand focuses on making new dance work for young people and family audiences.” 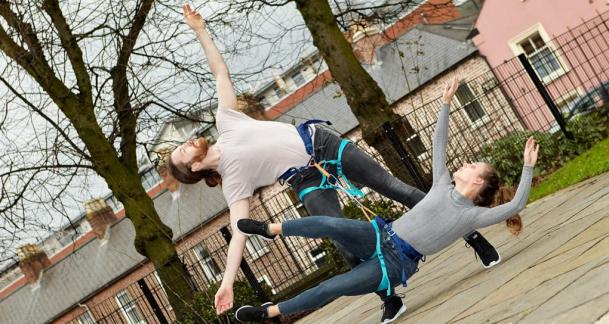 Young at Art’s longest serving director Ali Fitzgibbon was in post for almost thirteen years. She was initially the only permanent staff member and recalls that the main task during her early years was “ … to focus the organisation’s ambition and energy and try to get underlying support to match that dynamism and passion.

“I wanted to see the whole sector thrive and grow. A rising tide floats all boats. If throughout the year, we can collectively make more and better, and artists can not only sustain themselves but have the dreams and opportunities to create on a world scale, we will have a rich cultural resource for years to come. No one company can achieve that and that was why I worked with partners like Paul McEneaney at Cahoots NI and Eimear Henry at Replay Productions to establish an annual showcase and ignite bigger and better connections with networks like ASSITEJ (the international association of theatre for young audiences). 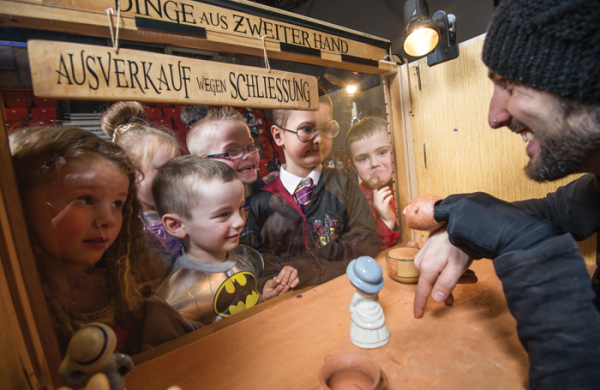 Fitzgibbon says that it is hard now to imagine that back in the late ‘90s it was quite a new idea to organise professional events and programmes for and with children:

“There were some, but not many, artists and organisations working in that way. Now there’s better provision, more artists thinking about and working with children. But there’s still much to be achieved. The organisation continues because there remains a need to lead both by example and collaboration, a need to challenge, educate and persuade in equal measure.

“This has never been ‘just’ a festival. From its earliest days, it was involved all year-round in building knowledge, capacity and confidence in order to realise the ambition of creating original, inspiring events and programmes that children, their schools and families want to be part of. It has played its role in civic, political and educational debates in the city about urban planning and regeneration, children’s rights, tourism, arts provision, audience development, inclusion, education and youth policy.”

A number of leading Northern Ireland creatives and companies acknowledge the crucial role Young at Art has played in their own development. Zoë Seaton is co-founder and artistic director of Big Telly one of the region’s longest established independent theatre companies,

“Big Telly’s first partnership with Young at Art was when we presented The Little Mermaid in a swimming pool during the 2005 festival,” she says. “Little did we guess that it would go on to play in Taiwan, Denmark, Belgrade and at festivals all over the UK and Ireland.

“We were blown away by the willingness of the then director Ali Fitzgibbon to take risks and encourage high ambition and commitment to work for young audiences. It was the first time we’d made work for a family audience, as opposed to projects designed for specific age groups in educational settings. It alerted us to the impact and importance of shared creative experiences across the generations and has subsequently underpinned most of Big Telly’s work.”

Belfast-based Cahoots NI consistently produces world-class work for young people.  In early February it opened Penguins at the Birmingham Rep and Shh! We Have a Plan is currently on a 14-week tour of the States. Its co-founder and artistic director Paul Bosco McEneaney attributes the very existence of the company to Young at Art:

“Anna Cutler commissioned me to create something for the 2000 festival. I wrote and performed a show called Puppet Magic, which was invited to several international festivals. Back then the only way to get public funding was to set up a company. Young at Art was the trigger.

“The festival has grown significantly over the years but its ethos and values remain the same.  It gives Northern Ireland children the opportunity to experience world class performance right on their doorstep by bringing in internationally regarded artists to inspire and ignite their imaginations.”

It is a philosophy with which the current director concurs and is seeking to expand.

“My aim is to put Belfast on the global map and make it a sought-after festival for delegates from across the world”, says de Barra. “I also want it to provide a platform for emerging local artists to try out new work at an early stage, putting it in front of international producers and theatre and dance makers.   That’s the purpose of our four-day TYA NI Scratchworks showcase.

“All children’s lives are enriched by the arts. It’s probable that our festival gives children in Northern Ireland their first experience of live performance. We take very seriously our role in championing the rights of young people to have access to the arts and, in the process, making the world a bigger and more wondrous place for them.”

The 20th Belfast Children’s Festival runs from 9 to 14 March 2018. www.youngatart.co.uk

An edited version of this article was published in The Stage online on 6 March 2018 and in the hard copy of the newspaper on 8 March 2018.