It is a genuinely thrilling experience to watch a group of eighteen young actors from this heady mix of countries, coming together for their graduation showcase at Cours Florent, the internationally renowned drama school in Paris.  Isabelle Adjani, Gad Elmaleh, Daniel Auteuil, Sophie Marceau, Guillaume Canet, Audrey Tautou and Diane Kruger are just some of its famous alumni.

Most of the current batch of students on the Acting in English course have trained together for the past three years and their close, instinctive trust and friendships are inspiring to witness, on stage and off.

For this landmark occasion, these talented and fearless young performers have chosen a wide-ranging selection of scenes from some of the best in world stage and screen. Henrik Ibsen’s Peer Gynt rubs shoulders with David Mamet’s Oleanna, Neil LaBute’s Reasons to be Pretty with Philip Glass’s Escape, Dennis Kelly’s Orphans with Brian Friel’s Translations.

There is surreal humour from Michael Cristofer and Jay McInerney’s Gia, Christopher Durang’s Funeral Parlor and Filippo Timi’s Mrs. Fairytale. There are scenes from the classic thriller Primal Fear, from Randall Johnson and Oliver Stone’s no-holds-barred Jim Morrison film The Doors and from Lucinda Coxon’s poignant drama The Danish Girl. There is a pivotal scene from Stephen Adly Guirgis’s intriguing four-hander Den of Thieves and a monologue from Alice Birch’s Many Moons, delivered with chirpy desperation.

Threaded through the two hour presentation are segments from the hard-edged and sometimes difficult to watch Female Transport, Steve Gooch’s play about six female London criminals, who, in the 19th century, were among many deported by ship to Australia, enduring appalling conditions and unspeakable cruelty from the male crew.

It is fascinating to see the way in which individual performers bring their respective cultural backgrounds into their performances. There is something deeply moving, for instance, in hearing a young Palestinian speaking Wajdi Mouawad’s lines from Tous des Oiseaux, in which a politically aware Arab woman breaks up with her Jewish boyfriend; watching a Scandinavian actor inhabit the dazzling, boundless imagination of Peer Gynt; an Irish girl and a French boy bringing the bilingual poetry and forbidden passion of Translations to a new audience.

At the end, each one takes the applause individually, with name and native country projected onto the back wall of the space.  It is an emotional final curtain call, the last time they will appear on stage together.

Here is the list of performers. They may not be familiar to you at the moment, but next time you hear any of them mentioned in stage or screen dispatches, just remember that you read about them first on The Even Hand: 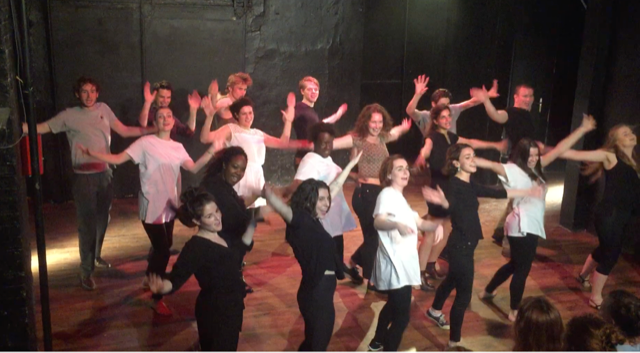