Producer: Druid in association with the Abbey Theatre.

The England in which the play is set is the famous ‘glorious summer’, which succeeded the ‘winter of discontent’.  But it is, in fact, merely a brief lull in the bloody, ongoing hostilities between the royal houses of Lancaster and York, the so-called Wars of the Roses.  What Shakespeare describes as ‘this weak piping time of peace’ is perilously poised and dangerously under threat from a variety of sources, not least the murderous, megalomaniac ambition of the title character, Richard Duke of Gloucester, youngest brother to the ailing king Edward IV.

In Druid’s handsome production Aaron Monaghan plays him as ’hell’s black intelligencer’, dissembling, deceitful, manipulative. Ever the supreme performer, he grabs immediate attention with his swaggering demeanour and easy wit before revealing the twisted body which contains them.

Tightly clad in inky black, his back sprinkled with sparkling scales, he scuttles around the political arena like a predatory cockroach, at once physically repellent and sexually intriguing.  He hides behind doors, creeps along corridors, eavesdropping, insulting, observing, constantly glancing over his shoulder for potential assailants.  Modern day equivalents are not difficult to identify.

There is no end to his depravity yet one can but watch with morbid fascination his shameless seduction of the distracted Lady Anne, his disdain for the deluge of curses hurled at him by demented old Queen Margaret and his breathtaking chutzpah in pleading that the bereaved Queen Elizabeth woo for him her daughter, the half-sister of the little princes he has done away with. 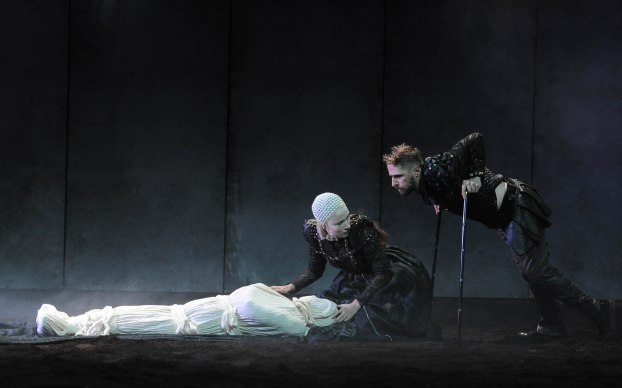 In this shadowy environment, death is a constant, hovering presence, depicted by a brightly lit skull staring out from a glass display case high above the stage. After the demise of the king, the crown is placed upon it as a gruesome omen of what is still to come.  As the ultimate prize slithers within Richard’s grasp, the body and blood counts rise, with spectacular displays of stagecraft.  There is a sickening predicability about the grisly, darkly comic ritual by which foes and false friends are dispatched like beasts by Marty Rea’s Belfast accented, bowler hatted executioner Catesby.

But with power comes paranoia. After the interval, the wise cracks wither and the confidence drops away as the weight of monarchy and the relentless approach of Henry Tudor’s army drag the creature’s centre of gravity ever lower.  It is a remarkable portrayal, complemented by those of four royal women whose lives are forever tainted by him: Jane Brennan’s elegant, Queen Elizabeth, Marie Mullen’s banshee-like Queen Margaret, Siobhan Cullen’s pallid Lady Anne and Ingrid Craigie’s grieving Duchess of York, who gave birth to this ‘ damned son’.

A shorter version of this review was first published in The Stage on 8 October 2018.