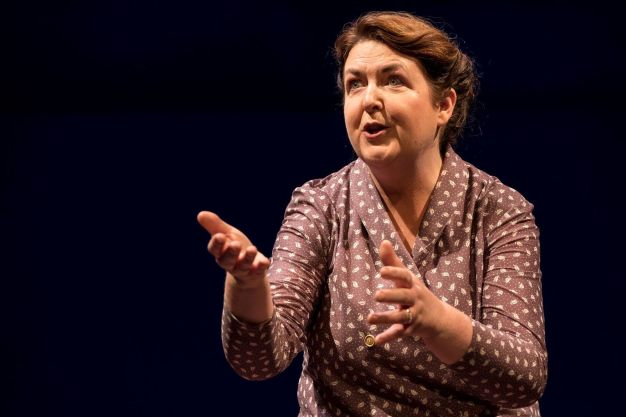 You don’t have to be alone to be lonely. Jean lives in a noisy, densely populated street in working class Belfast, while Elsie leads a quiet life with her husband Cecil and prematurely widowed Arabella takes refuge from the world in her affluent family home beside the sea.

Surrounded by evidence of post-war tragedy, these lonely women have little in common. Then, on a single day, a random act of kindness gives each of them a renewed sense of purpose and a means for regarding their mundane existences through a significantly altered prism.

Set in 1960s, pre-Troubles Belfast, Marie Jones’s new play marks an unexpected departure from the boisterous, raucously comedic style so beloved by her devoted audiences. In three interlocking monologues, the tone is softer and the humour more subtle, though her observational talent for human connections remains as sharp as ever.

Lindsay Posner directs with understated sensitivity to textual rhythms and emerging revelations and Peter McKintosh’s quietly evocative design concept follows suit.  The three actors, Katie Tumelty, Laura Hughes and Lucia McAnespie, are seated against the backdrop of a vast, photographic seascape, listening attentively as each, in turn, moves to the narrator’s seat at the centre of a burnished round.

The complete story of their shared day comes dropping slowly.  Skilfully crafted little hints and clues feed into the seemingly insignificant incidents which will have a profound effect on all their lives.  Jean’s and Elsie’s stories interlink so effectively that by the time Arabella comes forward there is not a great deal remaining to be said – not even a passing reference to the letter which gives the play its title.  We learn of how the young widow has finally come to terms with her loss and her solitude but it is Tumelty’s short epilogue which ruefully fills that central gap. 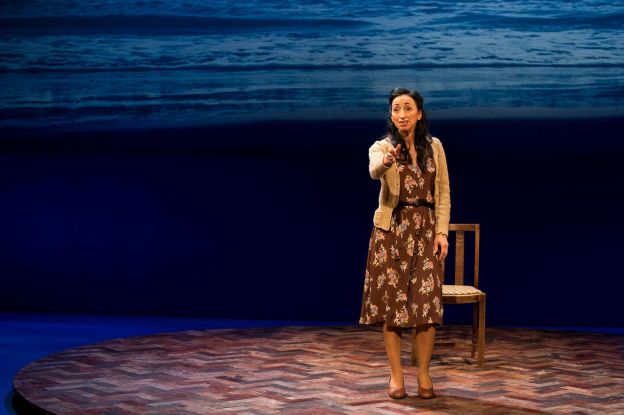 Jean lives alone with her elderly mother, who spends her days amid a clutter of cheap ornaments, swotting flies. The sun does not shine on their side of the street. Theirs is the dark side. With acute, instinctive perception, Jones endows Jean’s deep seated melancholy with an engagingly authentic voice and a sardonic sense of humour, to all of which Tumelty responds touchingly and with truth.

As solid, sensible Elsie, Hughes provides the beating heart of the triangular narrative. Contrary to outward appearances, she has had her moments of romantic fantasy when working as an usherette at the local cinema. Now her cat Nelson is the sole outlet for her affections, since her husband returned from the war silent, uncommunicative and minus an arm. With a smile that could light up the city, Hughes steers her recollections to an unexpectedly moving conclusion.

Jones is noticeably less assured in voice and characterisation in the final chapter, haltingly delivered by McAnespie’s elegant, enigmatic Arabella, whom Jean encounters during her brief, despairing break for freedom.

Structurally and vocally uneven though the piece may be, Jones has revealed both a persuasive new side to her writing and an enduring ability to shine light into darkness.

An edited version of this review was first published in the Irish Times on 18 October 2018.