In everyday conversation in Russia, a white crow is an oddball, an outsider, a social outcast.  There could be few better ways of describing the withdrawn, solitary child,  who was born in 1938 to a Tatar Muslim woman on a speeding  train near Irkutsk in Siberia and who would grow up to be none other than Rudolf Nureyev.

Whether hanging back from a game of snowballs with his classmates,  abandoned in a snowy forest beside the dying embers of a fire by his war-damaged father or stoically parting from his mother as he sets out on his dance training, this grave-faced young boy subconsciously became insulated and isolated from both family life and the wider world.  It is a quality which, years later, would mark out not only his singular artistic genius but also a magnetic, sometimes impossibly difficult personal charisma, that both attracted and repelled.

Ralph Fiennes notches up an impressive double triumph, directing with sensitivity and sensibility, while tackling the Russian speaking role of self-effacing Vaganova Academy dance master Alexander Pushkin with gentle, understated aplomb.  His casting of Tatar actress Chulpan Khamatova as Pushkin’s wife Xenia, is equally effective.  Without a word of discussion with her passive husband, she takes in the young, injured Rudi, settles him permanently into their one-roomed flat and nurses him to physical and sexual health.

The face and body of first-time actor Oleg Ivenko dominate almost every frame.  In facial and physical appearance, it is completely credible that his younger self would have grown into this bewitching creature, with heavy lidded eyes, confident bearing and scarred upper lip, the object of sexual desire by men and women alike.

It is no criticism of Ivenko’s competent performance that nobody could be expected to entirely inhabit the iconic presence of Nureyev, except the ghostly creature flitting through the end credits – Nureyev himself.  It is more down to surprisingly uncertain scripting that some of the crucial moments in his defection adventure pass by almost by default.

There are occasional dazzling glimpses of Ivenko in some of Nureyev’s most celebrated roles – in Swan Lake, La Bayadere, Giselle – but the core of the story is not of his countless stage triumphs but of the bolt for freedom which caught the imagination of the world media and catapulted a relatively unknown Soviet dancer into a global cause célèbre.

Unlike the electrifying performance style of the man himself, David Hare’s screenplay misses several essential beats.   For instance, the excitement of discovering Paris for the first time is conspicuously absent.  Trudging around the fleshpots of Pigalle and taking leisurely late night strolls along the Seine with Adèle Exarchopoulos’s surly, deadpan Clara Saint seem more like a punishment than the heady, exhilarating experience it undoubtedly was for a curious, fearless young artist newly arrived in the wicked west.

The apparently random flashbacks in time and cinematic style are intriguing, however, with Mike Eley ‘s atmospheric cinematography skilfully capturing, in turn, the bleak, freezing landscape of Rudi’s childhood home, the dour Soviet grandeur of 1950s Leningrad and the bustling, burnished charm of 1960s Paris. 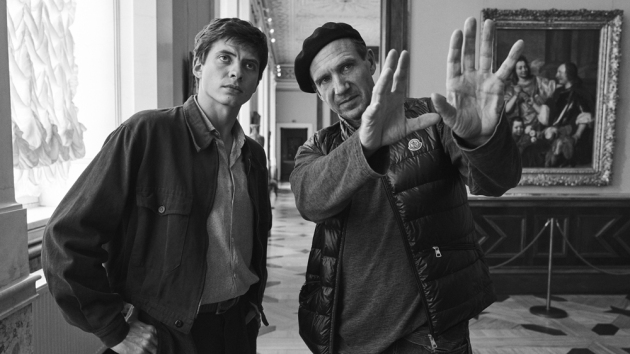 The play trots along harmlessly enough until the final 20 minutes, when it turns from a workmanlike biopic into a nail-biting thriller.  The jeopardy of Nureyev’s threatened return into the hands of the angry Soviet authorities racks the storyline up several notches.  Suddenly the audience is given a real sense of what is at stake, of the peril in he has placed himself by his insouciant wanderings around Paris, his visits to the Louvre, his friendships with unauthorised companions and the unending exasperation he inflicts on his clumsy handlers.

The action jolts us back to the days of the Cold War, when spies were exchanged at Checkpoint Charlie and life on the other side of the Iron Curtain loomed grey and mysterious.  Caught between two worlds and two doors, faced with a choice between family and art, we watch breathlessly as one of the greatest dancers of all time makes a life changing decision from which there would be no return.  It all seems so recent, so vivid – the flight of the white crow.