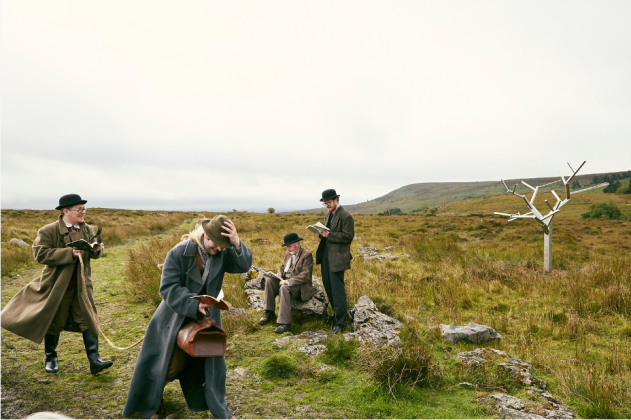 For The Even Hand, summer simply would not be summer without Arts Over Borders. But this year, not even the searing heat of the dog days nor warm, balmy evenings in the countryside of Brittany can make up for being at a distance from this challenging triptych of festivals, dedicated respectively to the work and vision of three of Ireland’s – and Europe’s – finest writers, Samuel Beckett, Oscar Wilde and Brian Friel.

Born in different times in different parts of the island, their literary paths, their educational backgrounds, their individual and collective influences, tangle and intercept like the maze of small roads swarming around the Irish borderlands.

As has become the norm, these three international festivals are peppered with exclusive one-off events. They run between 25 July and 18 August and are again created by veteran programmers and curators Sean Doran and Liam Browne.

The island town of Enniskillen, where Beckett and Wilde were schoolboys, hosts the Happy Days Enniskillen International Beckett Festival from 25 to 28 July, followed by A Wilde Weekend: Home of the Happy Prince from 1 to 5 August.

The triptych is completed by Lughnasa FrielFest: Derry-Donegal, Here I Come! from 15 to 18 August, its title a riff on one of Friel’s finest plays (Philadelphia, Here I Come!) and geographically centred around the writer’s own home place.

The borderland locations of all three play a crucial role in the programming concept, taking on renewed resonance in what is likely to be the final year before Brexit kicks in.

“Arts Over Borders follows a bespoke format which takes its inspiration from the genius of a single artist,” says Doran. “It is curated with a strong sense of place, both rural and urban, throughout border communities and landscapes.

Happy Days launched in 2012. It began life – and remains – the only international multi-arts cultural festival taking place in the North during the summer months, running alongside similar events in Galway, Kilkenny and Carlow.

In this, the 30th anniversary of Beckett’s death, it hosts world premieres of three of his rarely performed short plays, led by two of the most revered figures in international performing arts.

And Romeo Castellucci’s company will travel directly to Enniskillen from opening the Aix En Provence Opera Festival. They will present Schubert’s Schwanengesang (Swansong) at the Ardhowen Theatre beside Lower Lough Erne.

The festival will also present Pas Moi & Not I, performed in French and English by the charismatic bilingual actress Clara Simpson, and Ohio Impromptu, the mysterious and heart-breaking two-hander directed by Adrian Dunbar.

The late work of artists such as Schumann, Scriabin and Chopin will feature in in Saskia Giorgini’s piano recital while the work of Aidan Higgins and Molly Keane will be discussed, respectively, by their widow and daughter.

Among the distinguished actors taking part in this year’s festivals are Adrian Dunbar, Greta Scacchi, Sean McGinley and Marie Mullen.   Veteran war reporter Ed Vulliamy will read from and discuss his book When Words Fail: A Life with Music, War and Peace, while Kabosh Theatre Company will present an all female production of Friel’s The Enemy Within in Derry and Omagh.

Arts Over Borders is all about forging lasting memories. There is a genuine thrill of shared experience about heading out at dawn or dusk in the company of a group of literary pilgrims, crossing lake or heathland, traversing bog or coastal shore for a reading or performance.

Following the success of last year’s event, there will again be an experiential performed reading of Waiting for Godot around Sir Antony Gormley’s Tree for Waiting for Godot, on bogland between Fermanagh and Cavan, in the Marble Arch Caves and on Malin Head. They will bookend the three festivals, moving from the Fermanagh-Cavan border up to the place where that same border disappears into the Atlantic between Counties Donegal and Derry. The event title is All Mankind Is Us: Walking for Waiting for Godot, taken from Vladimir’s quote: ‘At this place, at this moment, all mankind is us’.

In the way that Friel wrote so lyrically of ‘hypnotic rhythms and assuaging notes’ in Dancing at Lughnasa, Beckett’s quiet voice perfectly encapsulates the importance of an international arts festival taking place on both sides of the Irish and UK border in these times.

“The three-cornered Arts Over Borders festival is similarly created by a socio-politico motivation rather than purely cultural. The border and Brexit and the arts; there’s no hard border when it comes to Beckett, Wilde and Friel.”

More information and bookings on: http://www.artsoverborders.com/