Over the past three and a half years, just about every conceivable permutation of Brexit and the implications thereof have been exhaustively examined, pondered, filleted and pulled apart.  So washed-up is the whole sorry concept that Michael Patrick and Oisin Kearney’s slick, subversive little satire arrives as a welcome  relief.

This smart creative partnership has conjured up a surreal alternative universe,  just as unlikely, unwanted and unworkable as the current débacle, neatly wrapped in Fishamble’s punchy production.

The narrative set-up invites a collective stretch of the imagination, a flexible suspension of disbelief.  In it, modern day Ireland has long been an integral part of the UK  but a referendum is taking place across the island as to whether it should stay comfortably embedded or take its chances and cut loose. Ancient Irish/British history raises its head above the parapet, providing rich fodder for scrutiny and dispute.

Fact proves stranger than fiction: an Irish woman, Ursula Lysaught (Karen Ardiff) is now the British Prime Minister; the dreary anthem God Save the Queen is jauntily bilingual, in a naughty tilt at the contentious Irish Language Act, currently the major issue blocking the return of the Stormont Assembly. 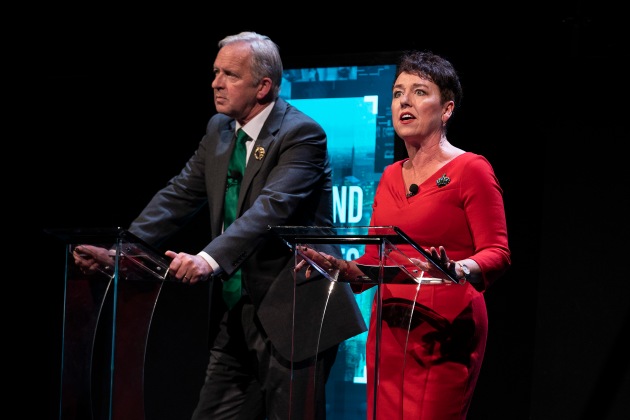 Events are closely focused within the BBC’s television studio in Dublin during the run-up to the vote.  Behind the scenes, presenter John, producer Richard and production assistant Hannah prepare for the double-headed confrontation, which they hope will pull in high viewing figures.  But they should be careful what they wish for.

The two opponents arrive and they’re off.  It is not long before heated debate ensues between Ardiff’s tough, politically ruthless Lysaught and Peter Keogh, leader of the Leave campaign, played with folksy, homespun blarney by Arthur Riordan.

Rory Nolan’s transparently smooth, self-seeking anchorman John superficially runs the show, but, in reality, it is his world-weary, recently widowed producer Richard (Lorcan Cranitch), who provides the brains and intelligence of the operation. Together they make a fine and credible stage pairing.

Within the lifelike framework of the studio set, director Jim Culleton has his work cut out in juggling an overload of information emanating from the contributions made by the debate participants, as well as from a deluge of of blurry, back-projected archive news footage.  Meanwhile, Patrick and Kearney are on a roll, concocting all manner of unsettlingly familiar scenarios, peppered with sharp, clever and very funny dialogue.

At this point, proceedings might have been brought crisply to an end, with the result hanging inconclusively in the air, as in the real world. However, the addition of an oddly sci-fi flavoured domestic tragedy, offered as a parallel sub text, somewhat dilutes and overwhelms the satirical effect. This is not to take away from a moving performance by Maeve Fitzgerald as Richard’s bereaved, psychologically damaged daughter Grainne.

Chaos ensues, in the production room and on the studio floor. On the streets, riots break out.  Egos are smashed, political expediency shredded.  It is left to John and Richard’s long-practised damage limitation skills to pick up the pieces of Grainne’s on-screen meltdown and lick their wounds, as they have done many times in the past, over a glass of the strong stuff.