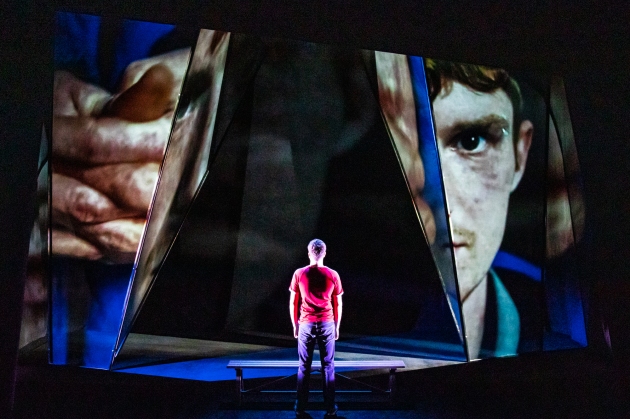 Such is the fate of a LAC – a looked-after child – the cold acronym suggesting the manner in which, in the current care system, troubled young lives can become dehumanised, reduced to a word in the social workers’ lexicon, rendered as a statistic on a spread sheet.

Fionnuala Kennedy has devised a moving piece of theatre, which incorporates a number of real life stories about the experience of being a LAC.  The central character is 9 year-old Adam, who pedals like the wind into his street one afternoon, drawn by the sight of a police car parked outside his house. His excitement soon turns to confusion when, without explanation, he and his 3 year-old brother Joseph are bundled into the car and driven to a strange house in a strange town, leaving behind their helpless alcoholic mother.

Under Emma Jordan’s searching, questioning direction, Adam’s nightmare begins to unwind through a narrative that will extend over a period of nine years.  In such an exposing, truthful piece, tremendous responsibility rests on the shoulders of the sole figure on stage.  Kennedy and Jordan have been very well served by the young Belfast actor Conor O’Donnell, who is here making an impressive professional debut. 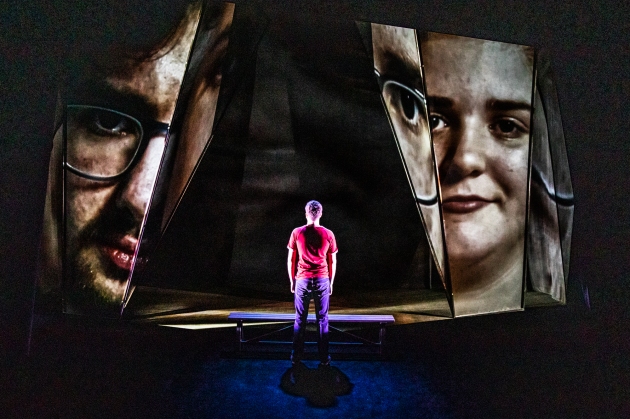 He imbues Adam with an easy likeability, a happy-go-lucky ability to adapt to an ever changing situation and a caring, compassionate nature, especially when it comes to the wellbeing of his little brother. In a bare black box space, dressed only with a low bench, O’Donnell guides us through the tortuous maze of a system in which many young people, unsurprisingly, lose their way and lose themselves.

Adam and Joseph are shuffled between foster parents and social workers, some sympathetic and supportive, others significantly less so.  Their despairing, inadequate mother cuts a tragic background figure, though the love and concern her sons express for her make their unsettled existences all the more upsetting. They have had to grow up quickly, changing schools, falling victim to bullying, putting on brave faces, never admitting their unenviable home life to their peers.

Adam’s rocky path hits a particularly painful bump with Joseph is taken up by adoptive parents.  His last sight of him, staring out of the back window of their car, leaves a lasting impression. Thrown back onto his own resources, Adam’s sweet nature falls prey to drink and dope and, after a fairly minor violent incident, he is placed in the permanent care of a children’s home.  In his eyes, this situation is a mark of shame.

Without resorting to self-pity or sentimentality, his story takes us into a shadowy world, whose norms and dubious practices are little known in wider society. Condemned to a regime of rules, regulations, curfews, instructions, anonymity and isolation, these young people become closely interdependent, sharing their stories and watching one another’s backs. On their 18th birthday, they are are obliged to move out into independent living. They find themselves totally unprepared and threatened by the dangers lurking in the outside world. 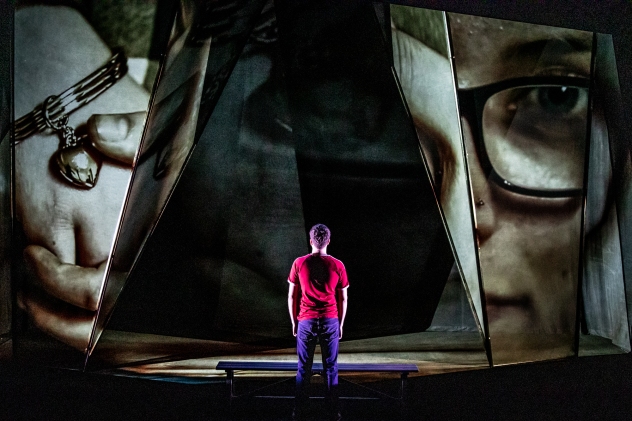 The piece was created in partnership with VOYPIC (Voices of Young People in Care), whose members offered invaluable individual contributions to the authenticity of its content and characterisation. And production teams do not come much more highly regarded than Ciaran Bagnall (set), Paul Keogan (lighting), Conor Mitchell (sound), Conan McIvor (AV design), Dylan Quinn (choreography), together with the photography of the late, much missed Matt Curry.

Kennedy’s impassioned work as a theatre maker and activist regularly tackles pressing social issues.  As with a previous piece, Entitled (about the benefits system), in publicly airing a difficult subject through the safe exploratory space of drama, real hope for change can be effected.

Some enterprising young people are currently doing it for themselves.  At the end of the performance, a young man speaks to the audience about a group who are seeking to change the language of the care system and draw attention to the way in which a single word can make a child feel disempowered or invisible. They are developing a dictionary of new words to replace what they describe as the ‘cold and distant’ official language used about them by social workers and civil servants.

Adam’s story is a vivid illustration of the way in which children and young adults can find themselves unwittingly sucked into a system and a lifestyle over which they have no control.  Theirs is a genuine ‘there but for fortune’ experience, to which audiences are charged with responding.

Find out more about Changing the Language on:  https://www.bbc.co.uk/news/av/uk-northern-ireland-48466031/kids-in-care-changing-the-language