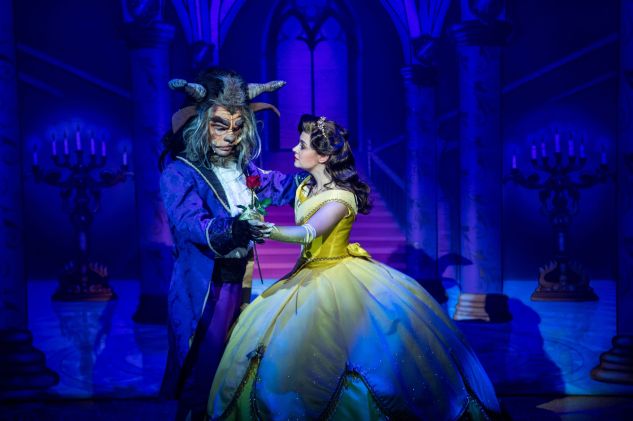 It’s once upon a time season in Belfast and the big Christmas bash in the Grand Opera House is upon us.  Its predictable, high-octane format is a dazzling visual and musical spectacle, with lavish sets, costumes, special effects and a sprinkling of television and cabaret celebs.

Leading the cast of Beauty and the Beast is Belfast’s favourite dame May McFettridge, here clocking up her 30th Opera House panto in the role of Mrs. Potty, housekeeper to Prince Sebastian. Over the years, the voice has become more gravelly, the accent thicker and more impenetrable. The gags, however, have changed little.  Audience members sit eagerly awaiting a barrage of insults of the “Where you from, big man?” “Poleglass.” “Catholic!” variety.

The much loved fairytale of the ugly beast and the beautiful girl who is captivated by his inner goodness dates back to 1740 and carries an enduring moral message. It takes hold in a head-turning opening scene where, on the huge darkened stage, a handsome but arrogant prince (Ben Richards) rejects a ragged old beggar woman.  Instantly, she transforms him into a fearsome looking creature, before rising high into the air as a shimmering Enchantress (Joanna O’Hare), whose sweet voice of reason will cast an air of calm over proceedings. 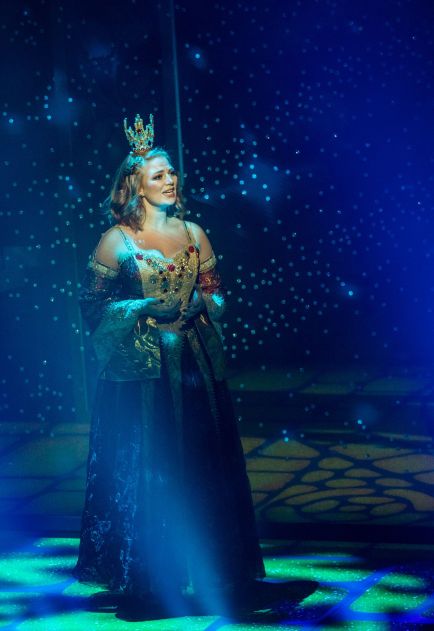 The action switches to a sunny town square, where warm-hearted Belle (engagingly played by newcomer Georgia Lennon) juggles the leering affections of Flash Harry (Danny Bayne) and the antics of her batty inventor father Paddy (Paddy Jenkins) and his partner-in-crime Mrs. Potty. On Belle’s birthday, the pair set off at speed for the castle gardens, in search of the perfect rose. 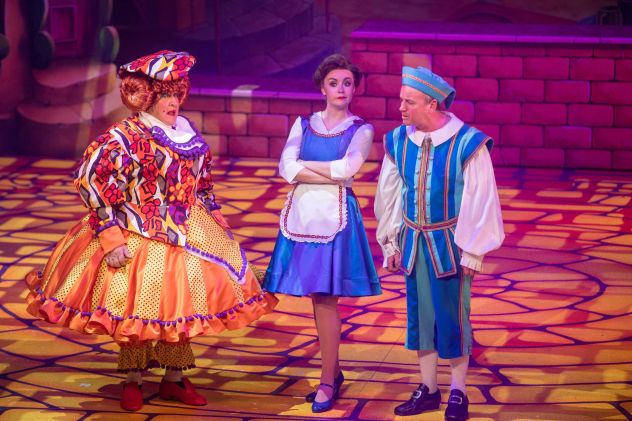 Into their midst steps the court magician Magic Mandy, whose role was wiped away by the Enchantress’s curse. With her character’s powers removed, Mandy Muden has her work cut out in trying to connect with a less than responsive audience.

The second act largely confines itself to the echoing interior of the castle, where the unlikely love story falteringly unfolds. Lennon and the Richards make a credible and touching pairing as they explore the theme of what constitutes true beauty.  In contrast – and to the noisy delight of their army of fans – McFettridge and Jenkins fluff their lines, fall over each other, get caught in doors and make things up as they go along.

This review was first published in the Irish Times on 5 December 2020.