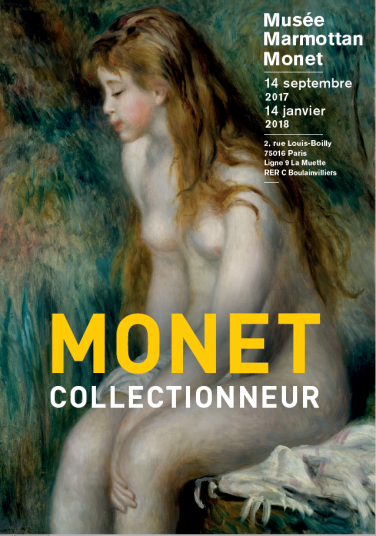 In everyday conversation in Paris, the phrase ‘the 16th’ means only one thing – the wealthy 16th arrondissement, which contains prestigious museums and art galleries, leafy parks and affluent residences.  Back in the19th century, this area on the western edge of the city was the countryside, wedged between the Jardin du Ranelagh and the Bois de Boulogne.  In a street overlooking the park is a former hunting lodge of the Duke of Valmy, now the Musée Marmottan Monet, keeper of the world’s largest collection of works by the Impressionist master Claude Monet.

In 1882 the lodge was bought by the affluent lawyer and collector Jules Marmottan and subsequently inherited by his son Paul.  He settled there, along with his private collection of art pieces and First Empire paintings.  Upon his death, he bequeathed all his collections to the French Academy of Fine Arts, as well as his town house, which, in 1934, was designated as a museum.  In 1940, the first of two major donations brought in a substantial number of works by Monet, Renoir, Pissarro, Sisley and Berthe Morisot and then, in 1966, the museum inherited a vast collection from Monet’s son Michel, including a number of the famous paintings of waterlilies and other flowers growing in the artist’s beautiful garden in Giverny.

Amid the museum’s restrained architectural splendour is the welcoming feel of a family home, albeit one replete with priceless treasures.  The rooms are decorated in restful shades of powder blue, olive green, turquoise, burgundy and dove grey and hung with a dizzying series of original paintings containing a great many familiar images from modern day commercial items.

The current exhibition is entitled Monet Collectionneur (Monet the Collector) and focuses attention onto the impressive private collection of the leading figure in the Impressionist movement.  Monet was extremely discreet about his dedication to acquiring and commissioning paintings by fellow artists, some of them established names, others to whom he lent encouragement and a helping hand.

These masterpieces, garnered over a long lifetime, constitute an exceptionally rare collection, including the painting which began the Impressionist movement – Monet’s Impression Sunrise, Le Havre.

For the first time ever, the museum has lifted the veil on this breathtaking secret treasure trove and revealed to the public an unedited exhibition of paintings, drawings and sculptures by, among others, Delacroix, Corot, Boudin, Jongkind, Manet, Renoir, Caillebotte, Cézanne, Morisot, Pissarro and Rodin.

Entry into the exhibition space is marked by a modest little painting La Partie de Pêche by Paul Cezanne.  It depicts a simple rural scene. Three friends sit fishing beside a river.  The heat of the day is captured in the brilliant sunlit fields behind, while the trio relax in the shady cool of a large tree.   Acquired for a small fee, this was to be the start of Monet’s collection.

Next comes Edouard Manet’s Claude et Camille Monet on his Studio Boat, an affectionate, unshowy portrait in which Camille shyly makes eye contact with the artist while Monet’s face remains unfinished.  It is thought that the couple were supposed to return for a second sitting, but they did not.  It is interesting to note that this attractive painting from 1894 is one of very few in which Monet and his wife appear together.

We move to an early sketch of a very famous painting Rue de Paris, Temps de Pluie by Monet’s favoured painter, the wealthy and successful Gustave Caillebotte.  Even at this preparatory stage, Caillebotte’s atmospheric capturing of a rainy day in the heart of Paris – Rue Clapeyron, just down from the Place de Clichy – demonstrates his extraordinary skill with urban perspective and his acute observation of the stylish bourgeoisie strolling in the streets of this newly fashionable area.

One by one, the exhibition unwinds, taking in a line of paintings by Renoir, including the exquisitely delicate Madame Clémentine Valensi, a young Jewish woman wearing Algerian costume; the signature painting Jeune Fille au Bain; and La Mosquée, Fête Arabe, painted in Algiers and costing an astronomic 10,000 francs, the highest price Monet ever paid for a painting.

In 1888 he met Rodin and the two recognised the genius in each other. Monet gave Rodin the present of a seascape, Rodin returned the favour with two small sculptures one of which was a model for his mighty edifice Porte de l’Enfer.  On its base, Rodin engraved the words ‘To the Great Master, Claude Monet, his friend, Rodin’.

We move into the years when, as his wealth increased, Monet purchased work by earlier masters like Corot, Delacroix, Boudin and Jongkind. In the 1890s and 1900s, he started to buy paintings by his friends, going to dealers and auction houses rather than sealing the sale direct with the artists. It was his way of signalling that his interest was inspired more by professional admiration than friendship.  In this section of the exhibition, we encounter a number of magnificent pieces like Cezanne’s Le Negre Scipion and Melting Snow, Fontainebleau.

Then comes a group of works acquired during Monet’s second marriage to Alice Hoschedé, the former wife of a wealthy factory owner, who had been one of his patrons. Some are warm-hearted family portraits, which were purchased as a sign of Monet’s deep love for Alice and her children.  After her death in 1911, he bought Carolus Duran’s painting of her as a personal keepsake.

The end is reserved for a multi-faceted homage to the artist himself in the shape of the waterlilies at Giverny, which he continued to paint even as his eyesight was failing.  The last of them, a weeping willow reflected in a lily pond, he kept close to him until his death.  It offers a poignant farewell to this unmissable event.

The exhibition continues until 14 January.