Based on the play by Anton Chekov

A production by Simon Stone

In August 1900 the Russian playwright Anton Chekov wrote a letter to his actress wife Olga Knipper in which he expressed the bubbling excitement of embarking on a new play.  He was creating, he said, not so much a play as ‘a type of imbroglio’, an entanglement, a massive confusion, a horribly complicated quandary.  What a wonderful word he chose for the maelstrom of emotions, family histories and vexed relationships, which would form the bedrock of, arguably, his greatest play Three Sisters.

Chekov set the play firmly in the present day, an instruction which has given leave for future adaptations to be reset contemporaneously as an endorsement of its universal and timeless themes.  This opportunity has been seized upon by Simon Stone, currently one of the most ground-breaking directors in world theatre. This thrilling new production was premiered in German at Theater Basel a year ago and is now being performed in French at Odéon Théâtre de l’Europe in Paris. Billed as ‘based on the work of Anton Chekov’, in three short weeks it has become the talk of the town, attracting packed audiences and multiple curtain calls.

On a frosty November evening, the narrow cobbled streets of the fashionable 6th arrondissement are festooned with Christmas lights.  Approaching from the Boulevard St.Michel, this neo-classical architectural gem, which is one of France’s six national theatres, rears up in floodlit splendour against a velvety sky.  While tourists stand in awe of its magnificence, Parisians accept it as merely a part of the cultural landscape.  With seats in the circle costing just 15 euros, it is hardly surprising that theatregoers of all generations are thronging its marbled foyers in search of one of the hottest tickets in town. 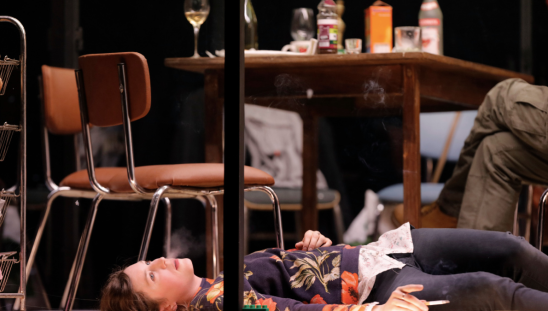 Stone was born in Switzerland in 1984 to academic parents and grew up in Australia and England. Interestingly, in Australia his work is sometimes accused of demonstrating the worst kind of European influence on theatre, whereas in Europe he has has been accused of being too interested in reality.  He grew up reading classic plays as literary texts – and loved them.  “But,” he says,  “the moment a play becomes a piece of theatre, you need to convince the audience it has something to say about the life they live now.”

Therein lies his entrée into Three Sisters.  He has refashioned the Prozorovs as a dysfunctional, thoroughly modern family, transforming Chekov’s elegant, restrained text into salty contemporary language which sways to the beat of pop anthems.  He has replaced love with sex and heightened the overwhelming sense of frustration and claustrophobia that characterises the original.

His revisioning finds its most eloquent expression in Lizzie Clachan’s spectacular, finely tuned design and the naturalistic set dressings that go along with it. A house, yes, an entire house, with huge plate glass windows and wooden walls has been constructed on a revolving stage.  It allows the audience an unflinching, constantly changing vista of the life of the household. Windows are opened and closed, focusing attention on successive scenes while relegating extraneous conversations to background chat. The huge construction glides and turns on an axis, permitting voyeuristic glimpses into what starts out as an ordinary day in the Prozorov holiday home, where sisters Irina, Macha and Olga, their brother André and a collection of spouses, lovers and friends regularly gather for special occasions.

This day is the birthday of the youngest sister Irina.  In the kitchen and on the outdoor deck preparations are in full swing for a summer barbecue and fireworks.  The chat is ostensibly superficial and light-hearted until little fault lines start to surface.  Elsewhere in the house life goes on and storylines develop. Someone is taking a shower, someone is sitting on the toilet, a couple is having sex in a bedroom, a few stragglers gather around a piano, drinks in hand.  The atmosphere is celebratory and congenial yet infected by illicit affairs and troubling secrets.

Personal difficulties slowly emerge; unhappy, mismatched marriages, unfulfilled relationships, social imbalances, financial difficulties are all picked over with a combination of unfettered passion and weary resignation.  The invasion of the outside world comes in the shape of Macha’s married lover and André’s common-as-muck wife, while other characters exhume long-embedded memories of times past. The single constant is the enduring love of the sisters for one another and their concern for their deadbeat but brilliant brother. 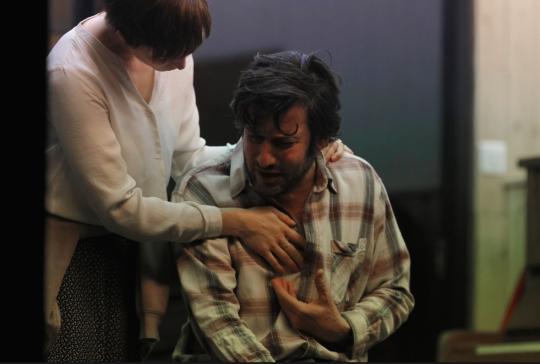 As summer turns to winter, the family returns to the house for Christmas.  Snow lies on the ground and fairy lights are hung on a laden tree as Macha and Alexandre’s passion reaches an agonising climax and André’s disastrous marriage implodes.  The intervening months have wrought changes, which will bring misery, loss and tragedy.  In the final act, the production achieves a palpable and almost unbearable sense of desolation signalling the end of the old order. The symbolism is deeply affecting as Amira Casar’s dependable and emotionally stable Olga oversees the clearing, emptying and cleaning of their beloved home. Meanwhile, the unwelcome new owners hover in the background, intent on demolition and tasteless rebuilding once the Prozorovs have turned the key for the last time on an irretrievable past.

Stone has achieved an inspiring and coherent reworking of a classic drama and, in the process, has created a classic for our own times, which will linger in the consciousness for a very long time.