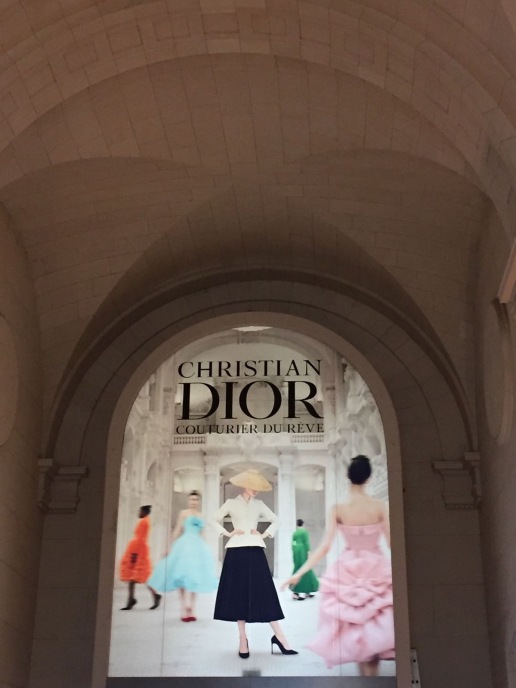 For the majority of ordinary mortals, haute couture represents an unattainable world of beauty, fantasy and dreams.  As the title of this vast retrospective exhibition implies – Couturier du Rêve (Dream Designer) – the ultimate purveyor of such dreams was Christian Dior.

Seventy years ago, in 1947, in the austerity of post-war France, he unveiled his first collection and created a radical new fashion silhouette for women – the so-called New Look.

In celebration of 70 years of the House of Dior, the Musée des Arts Décoratifs, which adjoins the Louvre, is staging a breathtaking journey of discovery through the countries and cultures, the private homes and great palaces, the gardens and galleries and glamorous occasions that constantly fed into the wondrous creations of this iconic fashion house and its much-loved founder.

But the journey does not begin and end with Monsieur Dior. The distinguished couturiers who were his anointed successors have continued to weave into their work a silken thread of life stories, histories, artistic and emotional connections laid down by the master himself.  They have developed their own individual visions of the links forged from the very beginning between couture and fine art, reminding us again and again that Dior began his career as the co-owner of a gallery and that among his lifelong friends were Salvador Dali, Jean Cocteau and Giacometti.  This lavish collection pays due tribute to the creations of those who followed in his illustrious footsteps – Yves Saint Laurent, Marc Bohan, Gianfranco Ferré, John Galliano, Raf Simons and now Maria Grazia Chiuri, the first woman to inherit the mantle. 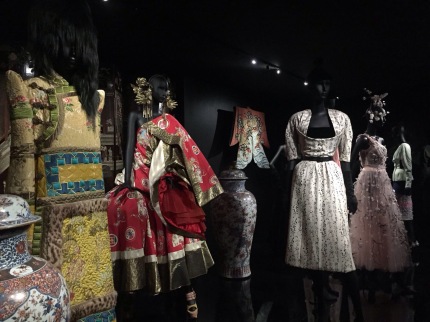 Sunday morning sees a queue the entire length of the museum straggling along the Rue de Rivoli.  Temperatures are close to zero but the mood is upbeat, even when a museum assistant emerges to warn of a three-hour wait. People disappear in search of cups of steaming coffee and hot chocolate, returning to find that their companions have advanced a mere few inches along the street.  Still, with the Seine, the outer walls of the Palais Royal and a long arcade of smart shops, hotels and galleries within view, there are definitely worse places to wait in line.

Time passes and eventually the grand entrance opens up. Inside the vast foyer, the colourful exhibition poster proclaiming Christian Dior, Couturier du Rêve beckons us into what will be a four-hour odyssey, filling both wings of the museum. Once inside, the curators – who deserve the highest praise for the artistry of their creation – waste no time in confronting us with what was to be the first step in a remarkable artistic journey.  What started with a famous photograph in front of the Eiffel Tower was to make its way from the Parisian atelier into the world’s high streets. Soon women everywhere were saving up to buy a version of the Bar Suit, with its soft shoulders, nipped-in waist and swirling, corolla-like skirt.  And there it is before our very eyes, the gorgeous original in all its scarlet silk glory.

One can look at every fashion photograph under the sun, watch the Oscars ceremonies, flick through glossy magazines, but there really is no substitute for seeing these creations, hundreds of them, in real life.  The monochrome Eiffel Tower photograph gave no indication of the rich red of the ensemble, a colour that, in its various hues, was a Dior hallmark. There are plenty of little black dresses on show, but it is the sultry drama of the many little red dresses that takes the breath away.

The journey through the galleries begins at the beginning, with Dior’s family home in Granville on the rugged coast of Normandy.  Sweetly personal family photographs, letters, diaries, drawings and sketches testify to a happy childhood in a wealthy family where art, music and, especially, gardening were part and parcel of daily life.  But nothing can prepare for turning a corner into a rainbow feast of high concept hats, jewellery, handbags, shoes, gloves and perfume bottles, all displayed in the most imaginative way possible.

One has to do a fair bit of jostling to read the descriptions accompanying an entire room of miniature originals and accessories, colour graded from white to grey to mauve to blue to green to yellow to orange to red to burgundy to brown to black.  In the darkness of the room, the theatrical lighting of their glass cases lends them a vibrant life all their own.

Then comes a gallery which sings of Dior’s love of flowers.  The ceilings are festooned with thick white paper garlands resembling climbing plants and creepers.

This is where the current artistic director Grazia Chiuri’s exquisite flower strewn silk dresses come into their own, alongside sculpted petalled gowns by her predecessor Raf Simons, whose first show for Dior was held in a grand town house whose walls were lined floor to ceiling with exotic blooms.

Appropriately, the next space brings us into the meticulous, exacting art of the parfumiers, the designers of the perfume bottles and the fragrance packaging concepts.  As with every item that leaves the House of Dior, every last detail is thought through and perfectly coordinated.

We progress slowly through a recreation of Dior HQ in Avenue Montaigne, through rooms devoted to the individual designers containing famous ensembles straight out of the top fashion magazines.

We move out of darkness and into the blinding light of a room filled with white shelving and packed to the high ceiling with the white cotton tuiles that constitute the first stage of every creation. 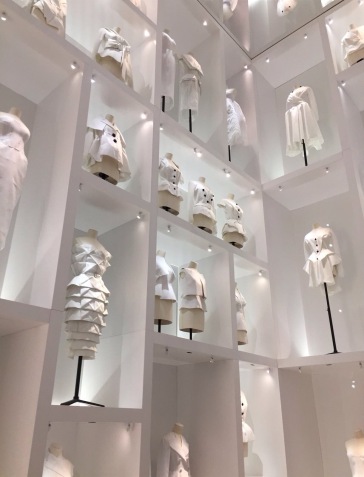 This is the engine room of the fashion house, the atelier (the workshop).  Two young Dior seamstresses, inheritors of a time-honoured craft, demonstrate the precise techniques of cutting, gathering, pinning, pleating, embroidering which go into every piece.  These women are artists in their own right and some of the most spectacular dresses on show honour the name of the embroiderer alongside that of the couturier.

The best is saved until last.  An audible chorus of gasps accompanies our entry into the museum’s 3,000 sq. metre nave and a dazzling climax. The stuccoed alcoves and ornate ceilings are alive with ever-changing projected images, morphing from star formations into leafy landscapes and a spectacular vision of Versailles, whose 18th century splendour was a constant source of inspiration to Dior. 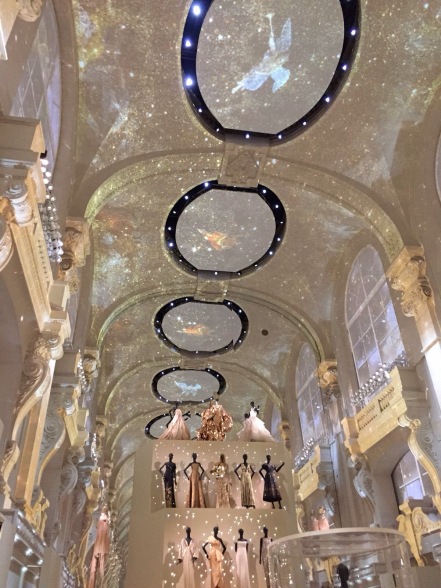 By now we have gazed in awe at the early genius of Saint Laurent’s androgynous look, the architectural precision of Gianfranco Ferré’s flowing creations, the theatrical collections of John Galliano, the cool minimalism of Raf Simons and the delicious femininity of Grazia Chiuri’s pastel shaded silk gowns, many of which echo Dior’s earliest designs.
Dream and fantasy combine in a spectacular collection of ball gowns worn by the many famous women whose names are synonymous with the House of Dior – Princess Grace of Monaco, Marlene Dietrich, Elizabeth Taylor, Rita Hayworth, Princess Diana, Olivia de Haviland, Felicity Jones, Natalie Portman, Nicole Kidman, Marion Cotillard … the list goes on. 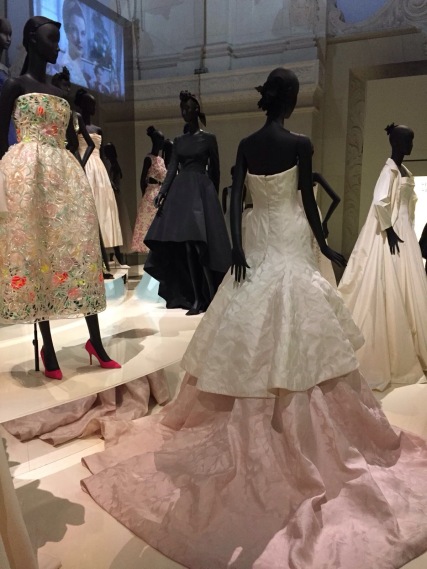 Here is the gorgeous tiered dress in which Jennifer Lawrence famously fell up the steps at the Oscars ceremony; the flowing cream silk ensemble worn by Rihanna at the Cannes Film Festival; the sparkling gold sheath reflecting the curvaceous shape of the J’Adore perfume bottle, worn by Charlize Theron for the advertisement filmed in the Hall of Mirrors at Versailles; and the Soirée Brillante signature gown, which was lent to this museum by Dior for an exhibition of 18th century cabinet making in November 1955.  It was an evening when models strolled among the guests and posed for photographs amongst the priceless exhibits, the combination of fashion and furniture design underlining Dior’s important influence on the history of the decorative arts. 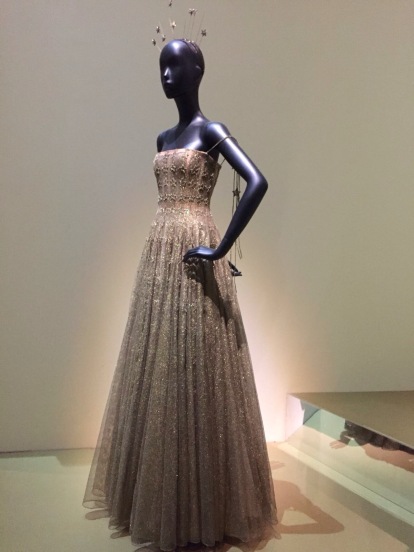 This shimmering dress was sourced after long, detailed research and is just one of many historic items in this spectacular homage to the unique, enduring vision and influence of a true maker of dreams.
Exhibition continues until 7 January 2018.