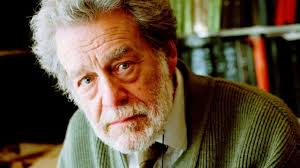 “The crown o’ the earth doth melt … And there is nothing left remarkable beneath the visiting moon.”

These stirring words from Antony and Cleopatra were chosen by former Royal Shakespeare Company director Trevor Nunn to express his profound sense of loss at the death of one of the giants of 20th century theatre.

The announcement of the passing of John Barton caused a heavy thud in hearts across the theatre world.  This writer experienced a sensation similar to that expressed by the actor David Suchet who said that when he heard the news “… my heart literally dropped into the pit of my stomach, leaving a big hole.”

Barton was one half of a fascinating friendship and unique creative partnership with fellow director Peter Hall, who died just four months before him.  The two were polar opposites – Barton a patrician, Eton-educated academic, Hall a flamboyant, brilliant maverick, the son of a station master from East Anglia.

In 1960, Hall issued an invitation to Barton to co-found the RSC with him.  It was a shrewd move.  Barton’s devotion to the company was total, his work for it continued throughout his long life.  In 1963, he and Hall collaborated on the ground-breaking The Wars of The Roses, a daring theatrical venture which would be seen as laying down the principles and direction of the emerging company.

If, like the writer of The Even Hand, you were reared on RSC Shakespearean classics on the main stage in Stratford-upon-Avon, the combined effects of Barton’s intellectual insight, sure dramatic touch, daring imagination, puckish humour and erudition last a lifetime.

This writer was privileged to see some of his most acclaimed productions, among them Twelfth Night in 1969, with Judi Dench as Viola and Donald Sinden as Malvolio; in 1976, a riotous Much Ado About Nothing, set in the Raj, with Sinden and Dench as Benedick and Beatrice (four decades on, its memory still makes me laugh out loud); Love’s Labour’s Lost in 1978 with life partners Michael Pennington as Berowne and Jane Lapotaire as Rosaline; Pennington as a nervy, highly strung Hamlet in 1980; The Merchant of Venice with David Suchet as Shylock in 1981; and the unforgettable 1973 production of Richard II in which Ian Richardson and Richard Pasco alternated the roles of Richard and Bolingbroke, monarch and usurper.

In 1961 Barton devised The Hollow Crown, a comprehensive anthology of the British monarchy.   It has been frequently revived and was as recently as 2005  on tour to Australia  and Canada, with  Derek Jacobi, Diana Rigg and Vanessa Redgrave in the cast.  The late Ian Richardson reckoned that every member of the RSC  “present, past or passed-on” had been involved in it at some stage of their careers.

The RSC’s current director Gregory Doran is of the opinion that Barton’s greatest influence on the company and the acting profession was “… his passion for the verse, and his ability to uncover the clues that Shakespeare wrote into the text to enable actors to deliver it with freshness and vivid clarity.”

Some of the most distinguished actors of our time have queued up to contribute personal tributes:

“How lucky we were to have learnt so much from him.”  Judi Dench

“I’m forever indebted to him – a beloved friend and a great spirit gone.”  Michael Pennington

“I knew John at Cambridge – me an acting undergraduate, John the lay Dean of King’s College and director of Henry IV Parts 1 and 2 and Three Sisters. At my audition for the Amateur Dramatic Club, my pieces were reviled by the listening committee. But John … overruled the rest, otherwise I would never have acted in Cambridge or anywhere else.”  Ian McKellen

“Thank you, John. You gave me an objective, a purpose, an image, an intent I still pursue today.”  Patrick Stewart

“His influence on the way we act Shakespeare is incalculable.”  Harriet Walter

He was the Prospero of British theatre, the ultimate magician of the stage.  How better to end The Even Hand’s humble reflection than with that character’s memorable ave atque vale in the final act of The Tempest?

Our revels now are ended. These our actors,
As I foretold you, were all spirits and
Are melted into air, into thin air:
And, like the baseless fabric of this vision,
The cloud-capp’d towers, the gorgeous palaces,
The solemn temples, the great globe itself,
Yea, all which it inherit, shall dissolve
And, like this insubstantial pageant faded,
Leave not a rack behind. We are such stuff
As dreams are made on, and our little life
Is rounded with a sleep.