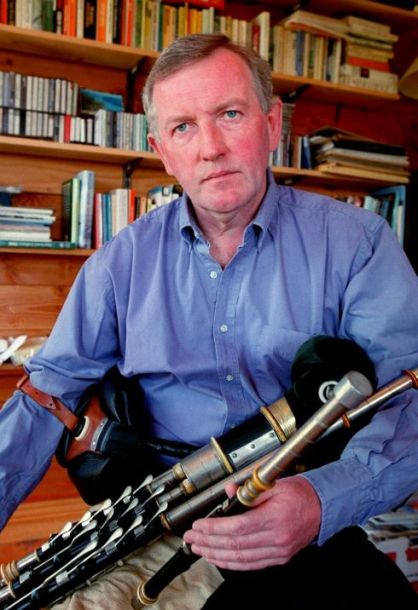 It’s a headline concert at the 2004 Festival Interceltique de Lorient (the FIL), the world’s largest annual gathering of the Celtic nations in the Breton naval town of Lorient. The Festival Orchestra is on stage in the Grand Théâtre, accompanying one of the undisputed giants of Irish music and a firm favourite of the FIL over many years.

Liam O’Flynn has just played the last notes of Shaun Davey’s The Brendan Voyage, which was premiered there in 1980 and had been christened by Ouest France newspaper  ‘the Interceltic’s baby’.  In response to the waves of thunderous applause and foot stamping, he launches into the rousing final segment by way of an encore. Lost in the music, he does not seem to register the shuffling sounds behind him and cannot see what the rest of us can see – the entire orchestra rising to its feet while continuing to play, in a spontaneous homage to the doughty little uilleann pipes and the modest man who is their undisputed master.

Afterwards, walking back through the crowded streets and still bursting with pride, we send him a text message. A typically downbeat reply comes back immediately.  “Thanks.”

This is just one of so many unforgettable experiences that bubble up on the day of his premature passing.

I was a fan long before I moved to live in Belfast, having worked closely with Jack King, a BBC Radio Wales producer, who was addicted to the music of Planxty.

‘What is that instrument?” I asked, when I first heard a gloriously plaintive wail rising above the pounding guitar, mandolin and bodhran sound bed that was Planxty’s unmistakable trademark. 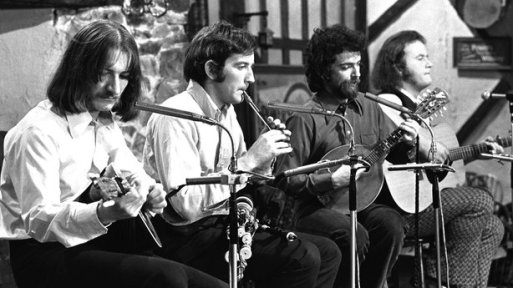 The likelihood of my getting to meet ‘God’, of chatting with him, interviewing him and attending many concerts and recording sessions over the years then seemed extremely remote. But years of working as an arts journalist on this island were to afford me that privilege.

Looking back, a jumble of vivid moments emerge. Like going to Windmill Lane Studios in Dublin to record part of a television documentary about Davey in the year in which he composed his Concerto for Two Harps. We were to film him at work in the studio, producing O’Flynn’s latest album. One by one the gang of collaborators came through the door – singer Rita Connolly, percussionist Noel Eccles, conductor Gearóid Grant, musicians Rod McVey, Arty McGlynn, Nollaig Casey. Last to arrive, to sarcastic cheers, was O’Flynn himself. Minutes later, musical magic ensued.

No one present will forget the stirring sight of O’Flynn and his great friend Seamus Heaney performing their collaboration The Poet and the Piper on the stage of the Belfast Waterfront Hall for St. Patrick’s Day. That memory is especially poignant now that the two of them have left us .

And then there was the wonderful Glanmore Gala Concert in 2014, the Year of Ireland at the Lorient Festival and almost exactly a year after Heaney’s death. O’Flynn and another close friend Neil Martin – with whom he played at the funerals of Heaney and Brian Friel – combined on pipes and cello to provide a musical complement to Doireann Ní Bhriain’s reading, in French, of a selection of Heaney’s poems. They were joined on stage by President Michael D. Higgins, who gave an emotional reading of The Given Note (the title of O’Flynn’s finest solo album).

Today, like many others, we will go back into our personal memory bank and give thanks for the man and his music, which will forever play on like that of the central figure in The Given Note.

For he had gone alone into the island
And brought back the whole thing.
The house throbbed like his full violin.

So whether he calls it spirit music
Or not, I don’t care. He took it
Out of wind off mid-Atlantic.

Still he maintains, from nowhere.
It comes off the bow gravely,
Rephrases itself into the air.