From the onset of the Industrial Revolution, going underground was a natural way of life for communities in places like the North of England, Scotland, the East Midlands and the South Wales valleys.

Not that there was much that was natural to human behaviour about gangs of men crowding into a lift that creaked down, down, down into the depths of a pitch dark subterranean world, where they would spend the next goodness how many hours on their backs or their knees or their bellies, extracting bucket loads of the black gold that kept the nation’s furnaces burning.

Grim and gruelling though the work was, this was what beckoned to thousands of young men who left school with a basic education and only the prospect of the pit for the next forty years or so. Many didn’t make it to retirement age, dying in terrible accidents, succumbing to lung disease from the constant inhalation of coal dust or simply from physical burn out.

A close-knit, intense camaraderie flourished between the miners and their families, a bond forged out of adversity, unshakeable trust among workmates and a pride in their role as the backbone of industry. 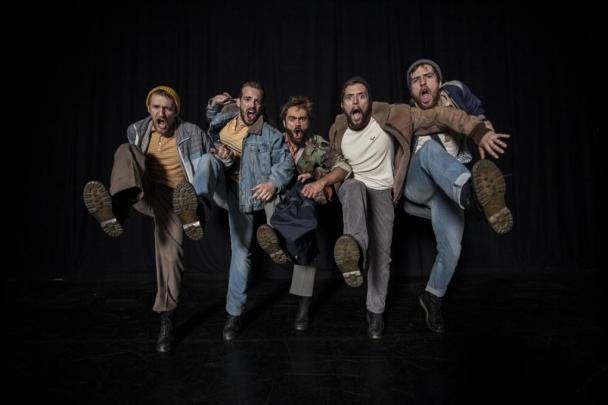 Dance artist Gary Clarke grew up in a mining community in Yorkshire, an experience that imbues this remarkable piece with overwhelming resonance and authenticity. Originally created to mark the 30th anniversary of the Miners’ Strike, COAL focuses less on party politics than on people, thereby communicating an even more powerful political message.

Back in 1984, I was dispatched to my home place by the then features editor of the Irish News – the much-missed Dave Culbert – to write a series of articles about the effects of the pit closures on local communities. From this side of the Irish Sea, I had read the papers, watched the television news and listened down a telephone line to stories of what was happening with the folks back home.

But being pitched into the new reality of life in the obscure mining town of Blaengarw, whose pit head marks the end of a long narrow road, remains a deeply upsetting memory. Families were living on the breadline, heading to the soup kitchen in the Miners’ Institute, banding together and sharing what little they had. Journalists and news crews were converging on the place to capture the seething anger and profound sense of injustice hanging in the air.

As the title of Richard Llewellyn’s famous novel suggests, the valleys of South Wales were green … if you looked up. But back then most people’s perspective took a downward trajectory, to the rich seams of coal which provided them with jobs for life, a steady wage, economic security and the means of feeding their families.

When Thatcher pulled the plug, those communities were left with nothing.

This lamentable situation is captured in a viscerally thrilling performance by Clarke’s five-strong male ensemble, counterpointed by TC Howard’s hilarious but heartfelt performance as the bustling little wife, who gets up early to scour the pans, make the breakfast, kick the husband out of bed and single-handedly rule the roost.

Leading with his heart as well as with finely tuned artistry, Clarke has crafted a beautifully cohesive piece, which combines a live brass band with grainy back-projected news footage, a vibrating soundtrack of white noise and classical music and wonderfully effective lighting and non-lighting.

His choreography conveys the raw rituals of work and home through a mixture of macho swagger, stylised movement and frantic scavenging. When wholescale redundancy descends and, with it, the full force of the law and the political establishment, those same movements translate into a completely different palette of emotions.

Two dramatic segments stand out. The drudgery of the coalface sweated out at high volume to the sound of Beethoven’s Fifth Symphony and then the sickening effects of Thatcher’s humiliation (portrayed by a grimacing Eleanor Perry and voiced by Spitting Image’s Steve Nallon), soothed by the brass band playing the beautiful Welsh air Dafydd y Garreg Wen (David of the White Rock). At this point, the sharp focus on stage is blurred by a veil of tears.